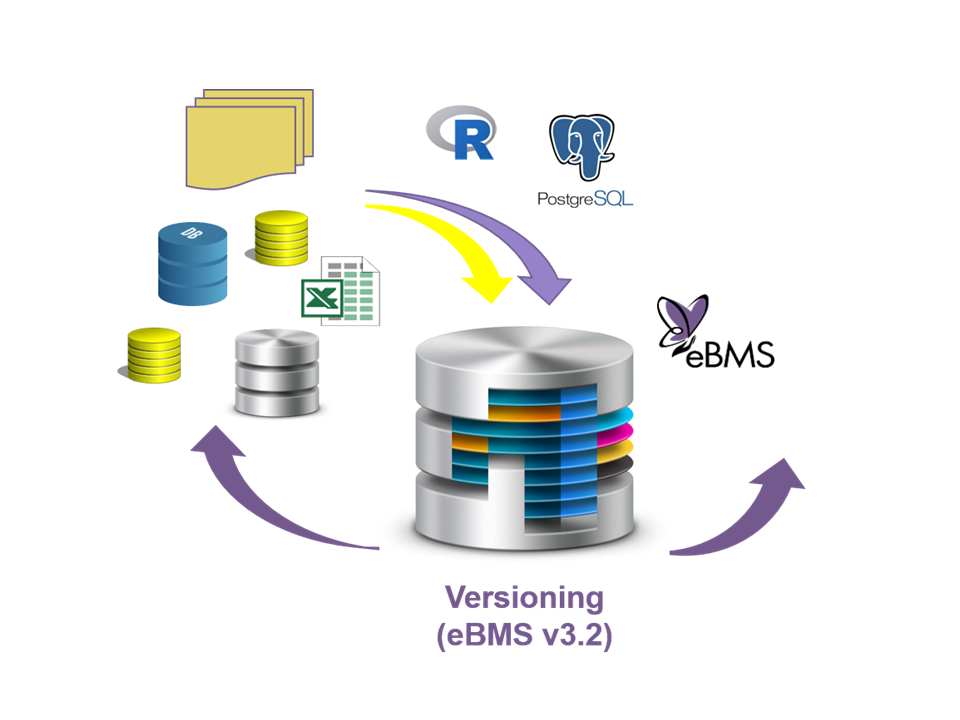 The latest version available is eBMS v4.1. This version includes data from 28 schemes, with 20 that are officially part of the eBMS partnership and eight additional datasets that have contributed to the database. When considered at the section level, the eBMS database v4.1 contains more than 15 million counts recorded in 30 countries spanning over a 44-year period (1976 to 2020). 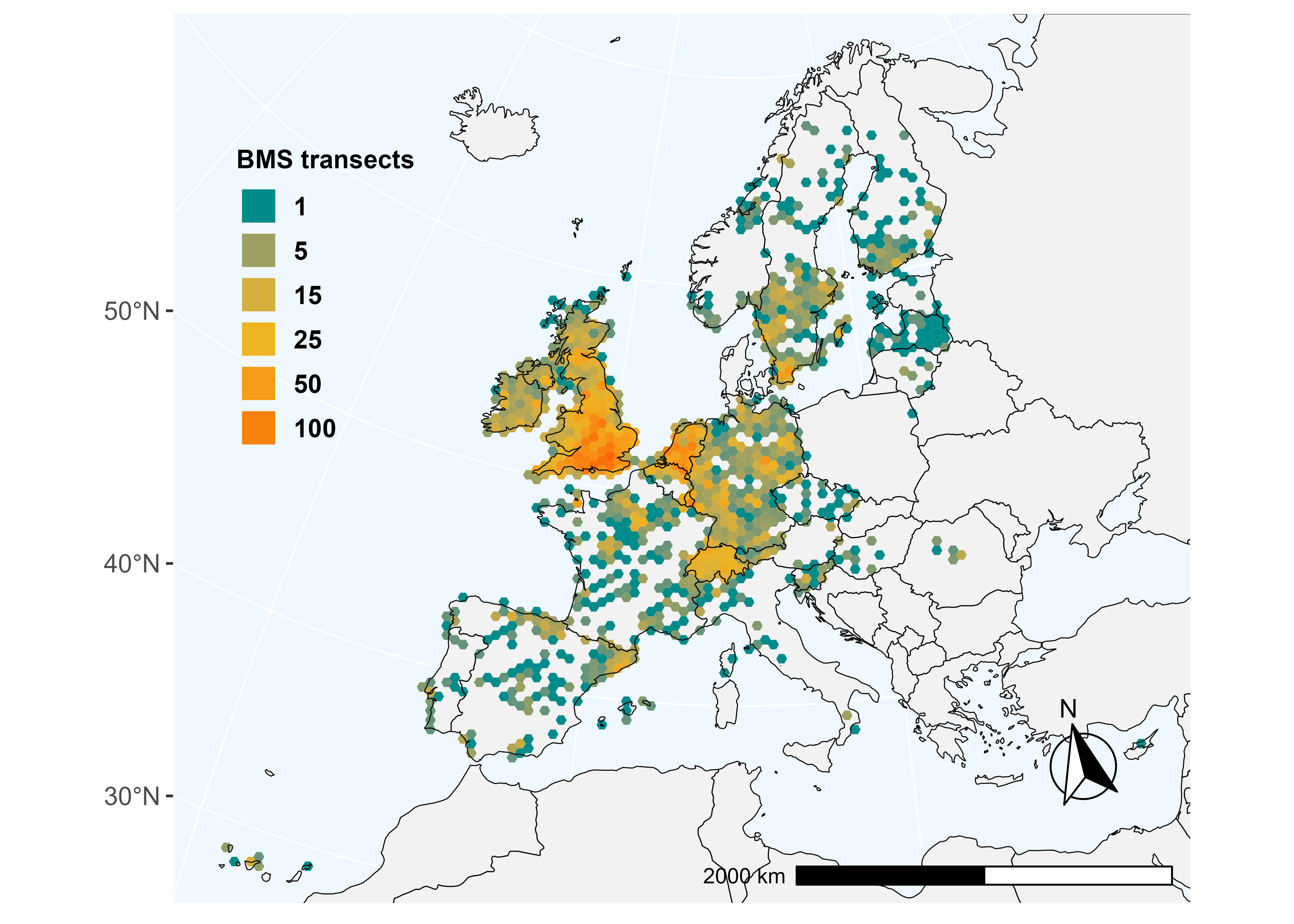 As of 2022, we have received data from 28 National Butterfly Monitoring Schemes that actively contribute their data to the eBMS database. Although not all schemes were in a position to provide their latest update for 2019-2020 (see figure), butterfly monitoring data for Europe continues to increase year-on-year.

Since 1990, volunteers have recorded more than 5 million butterfly count events along transects and documented them at the species level. These counts have been recorded from over almost 900,000 monitoring events (e.g. BMS transect visits).

Map: The density of Butterfly Monitoring transects visited per 50km grid across all schemes that have contributed to the eBMS database (as of v4.0). Densities are calculated from sites that have been visited at least once since 2000. 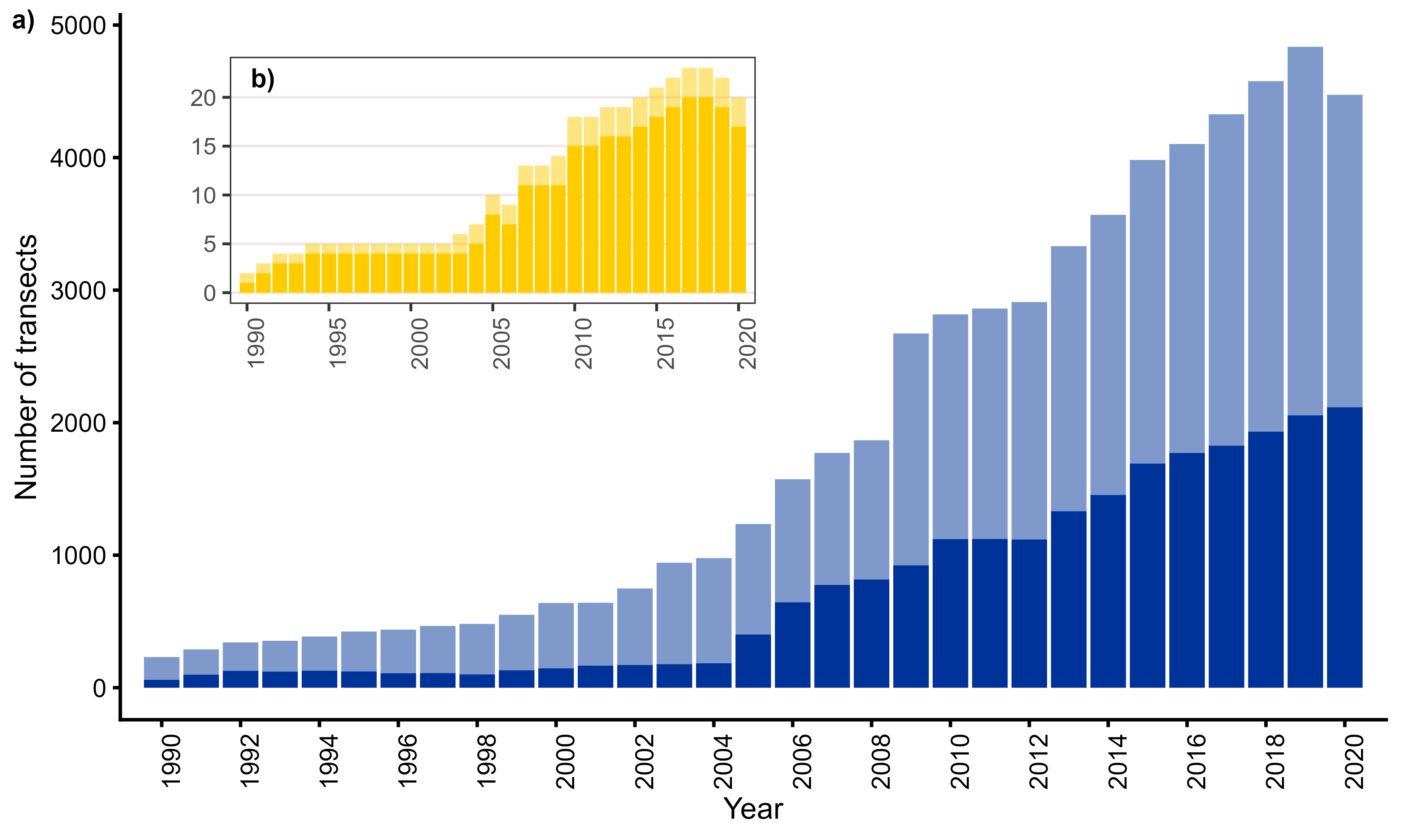 Transect Graph: a) Number of Butterfly Monitoring transects that contributed to the European Butterfly Indicator (1990-2020), where schemes within EU27 are represented in dark blue and non-EU schemes in light blue. b) Number of Schemes contributing, with 24 BMS operating across 20 EU27 member states.

The eBMS data has increased recently with the join of several schemes and the creation of new schemes providing more data and transects. As of today (2022), the army of skilled volunteers has identified and recorded 318 of the 496 species observed on the European continent (Wiemers et al. 2019). Although the protocol and the extent of the BMS contributing to the eBMS database do not capture all species, the species monitored are proportionally representative of their distribution among families and the phylogenetic tree

On the pie graphs below you can see the taxonomy covered by eBMS. The number of butterfly species by family with data included (a) within the European Butterfly Monitoring Scheme (eBMS) database and, (b) for the whole of Europe (Wiemers et al. 20193). 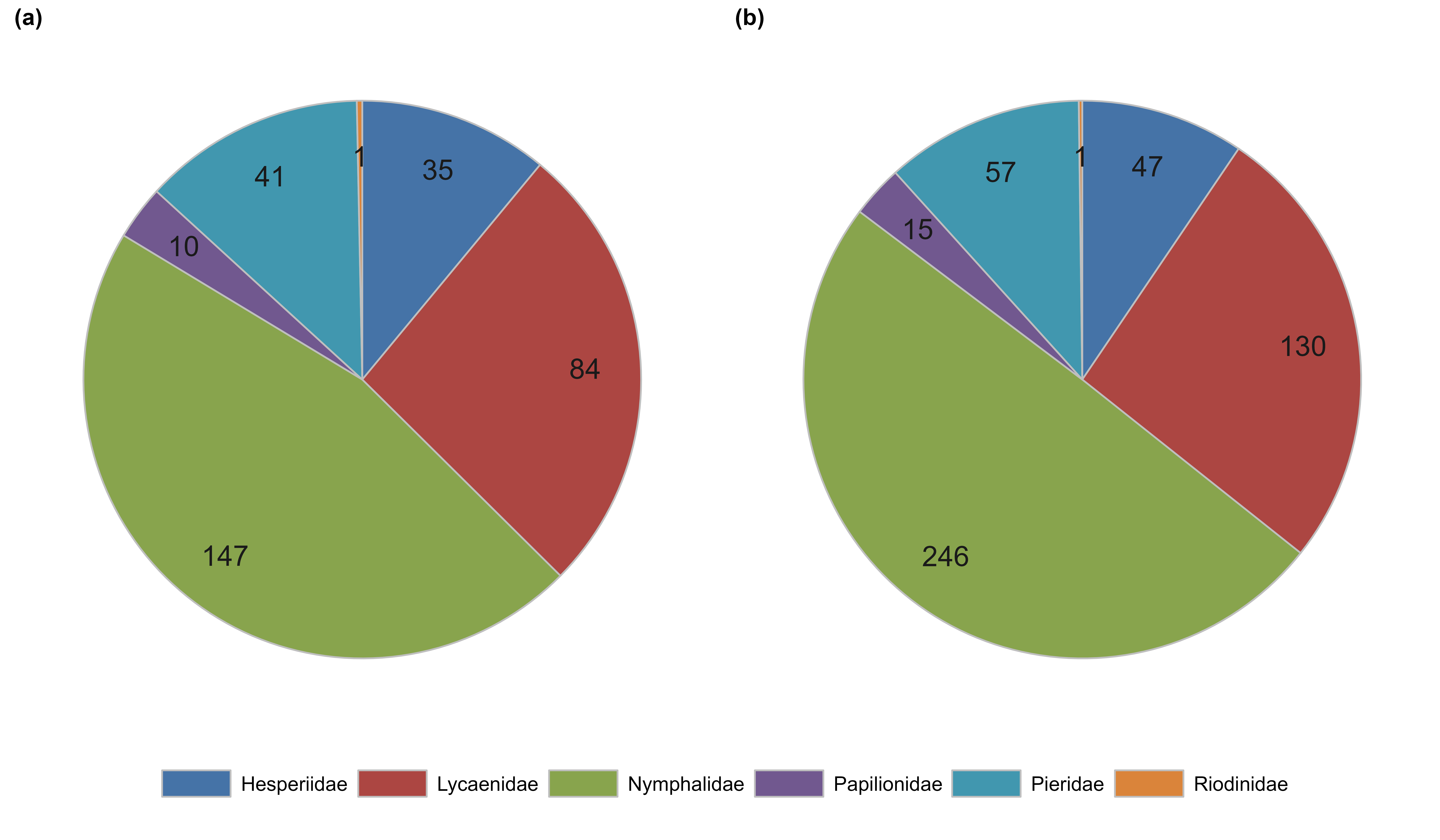 Some of the EU biodiversity indicators provide specific measurements and trends on genetic, species and ecosystem/landscape diversity, but many have a more indirect link to biodiversity. Very few have been explicitly established to assess biodiversity. The status indicators on species only cover birds, bats and butterflies, since these are the only taxa/species groups for which reasonably harmonized European monitoring data are available (EEA, 2012).

Butterflies are ideal biological indicators: they are well-documented, measurable, sensitive to environmental change, occur in a wide range of habitat types, represent many other insects, and are popular with the public because of their beauty. Field monitoring is essential to assess changes in their abundance. Indicators based on butterfly monitoring data are valuable to understand the state of the environment and help evaluate policy and implementation. Trained volunteers are a cost-effective way of gathering robust data on butterflies, more so when supported by informative materials and efficient online recording.

The butterfly indicators are based on the fieldwork of thousands of trained professional and volunteer recorders, counting butterflies on more than 10,000 transects scattered widely across Europe. These counts are made under standardised conditions, providing high-quality data that are suitable to assess species status and trends. National co-ordinators collect the data and perform the first quality control. More information on the Method page.

European butterfly experts selected species they considered to be characteristic of European grassland and which occurred in a large part of EuropeIn Europe, to create the Grassland Butterfly Indicator. This first butterfly indicator was created in 2005 for the first time as a unified measure of biodiversity following the bird indicators as described by Gregory et al. (2005), by averaging indices of species rather than abundances in order to give each species an equal weight in the resulting indicators.

The European trend shows a significant moderate decline of 22% while for the EU27 the decline is 25%, although there is greater uncertainly in the yearly estimates for this indicator due to less data included. This decline is slightly lower than reported in earlier versions of this indicator. The main reasons are that the main decline of grassland butterflies to date is in Northwestern Europe, caused by intensification of agricultural grasslands, and nitrogen deposition in nature reserves (WallisDeVries & Van Swaay, 2017). Furthermore substantial decreases probably already happened before the start of the indicator calculation in 1990 (Van Strien et al. 2019). 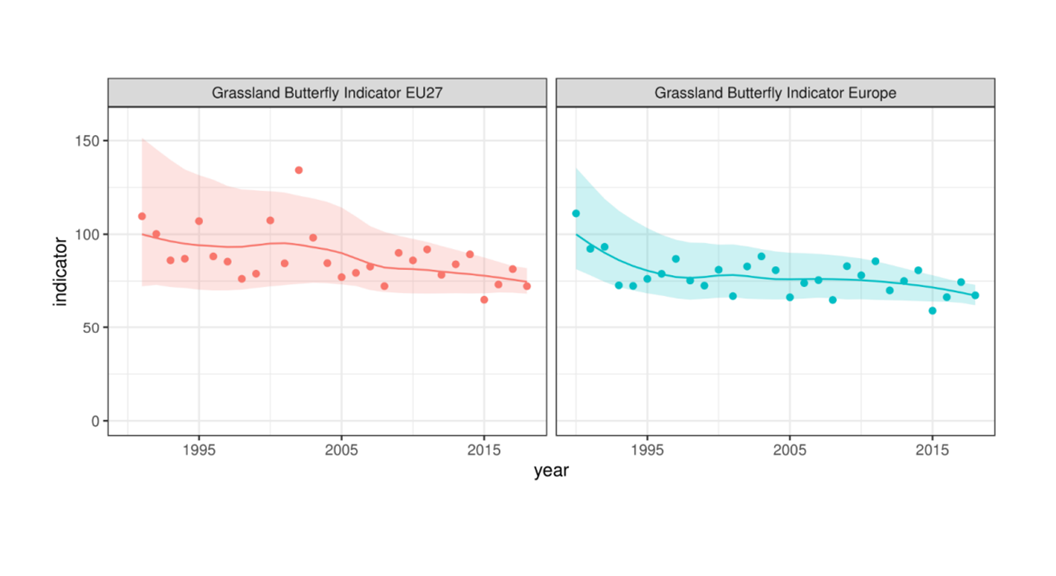 To discover more indicators produced by eBMS and how the indicators were calculated, please check the ABLE Report Task 1 - Butterfly Indicators (pdf in English)

The previous EU Butterfly Indicator for Grassland species, 1990-2017. The EU Butterfly Grassland Species 1990-2017 indicator is part of the monitoring report on progress towards the SDGs in an EU context — 2019 edition, which can be accessed here.  The grassland butterfly indicator contributes to Goal 15: Life on Land.